CSS selectors define the elements to which a set of CSS rules apply By default, all CSS styles of a module are applied to the module's HTML element, this is why original CSS selector is chosen. Original is just a convenient name, it equals to class of the module's element. 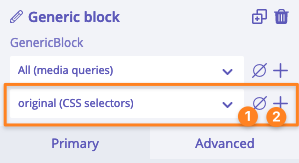 This is the select with the list of CSS selectors.

CSS selector created under template and global settings is applied to .builderiusContent element.

We can write any CSS selector inside the input and receive the suggestion about the number of targeted elements.

In order to add/remove styles for a specific CSS selector, we should choose it first in the dropdown. 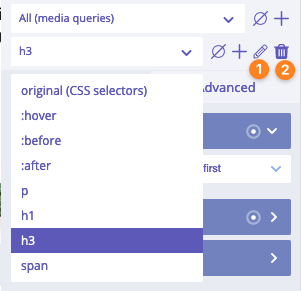 After CSS selector is modified, all the styles of the previous one are getting transferred to the new one.

After CSS selector is deleted, all its styles are deleted as well.

Taking into account the scopes of CSS related settings a good strategy would be to define styles for typography on global settings level. It means that h1, h2, h3, p, blockquote etc are created in global settings. Later, we can re-style specific elements by defining the new values in template and modules' settings.

CSS selectors combined with custom @media queries allow styling of everything in any possible responsive versions of the page(s).